They decided they’d try their hand at entrepreneurship by hand crafting doors out of solid wood using age old techniques like mortise and tenon from the comfort of their own garage. (It really wasn’t so comfortable). They had the opportunity to expand their business to include shutters and they jumped on it (it helped that it moved them out of their garage). Fast forward to today, they no longer make doors and they now have an amazing team.  They still make shutters by hand and their focus remains on top quality and delightful customer service.

Our Promise to You

Luxury exterior shutters made with quality craftsmanship tailored to meet your needs. 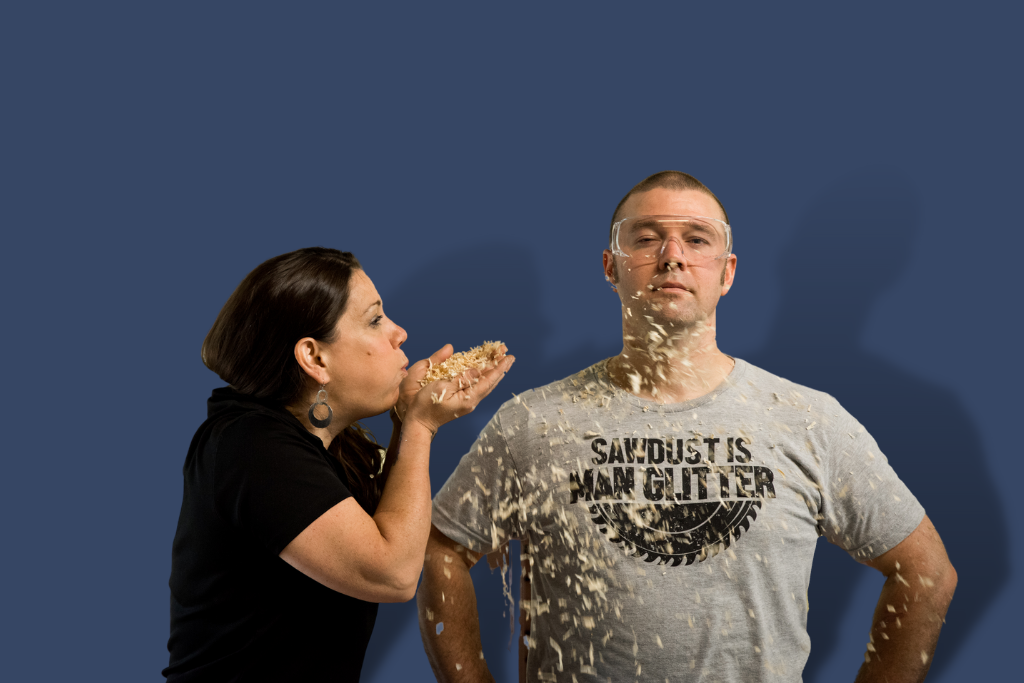 Made in the USA

Our shop is located in The Upstate of South Carolina.  We put each shutter together in house, by hand.

Not only do we know about shutters, we also know important facts like the fact that, on average, it takes 364 licks to get to the center of a Tootsie Pop.

We work with first-class suppliers to ensure we have premium material. Every shutter is inspected by a member of our team.

Ask about our 20 year Chip & Peel  Warranty. Some exclusions apply, but we’ll bet our shutters will last long after you move.

Only The Best Quality Materials

With over 25 years of shutter making knowledge, only the highest quality materials are selected for our products. From our single piece polymer infused wood fiber Everwood shutters that will withstand moisture, rot, and bugs to our all aluminum powder coated Endurance line, we strive to provide authentic, durable, and beautiful accents to your home. 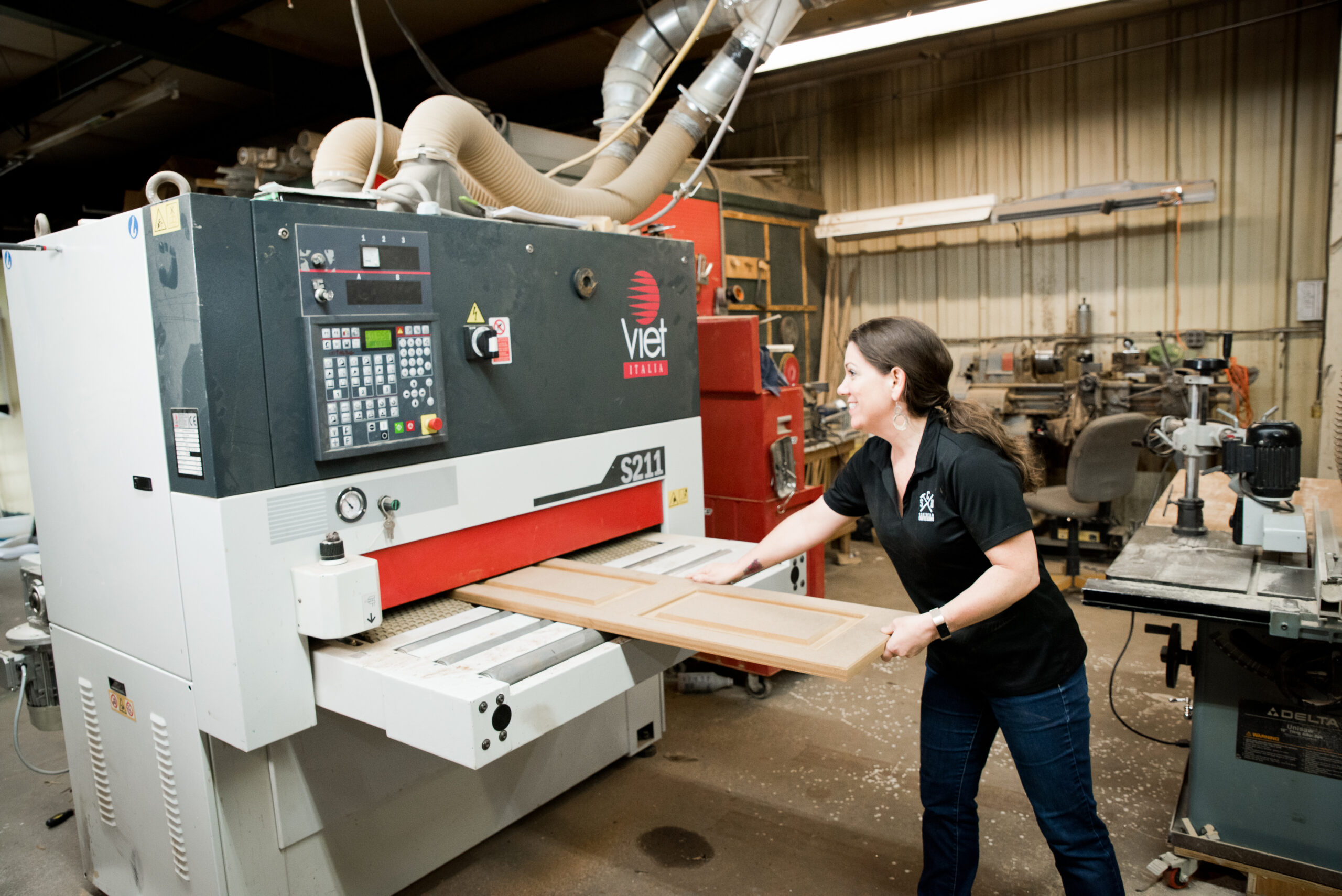 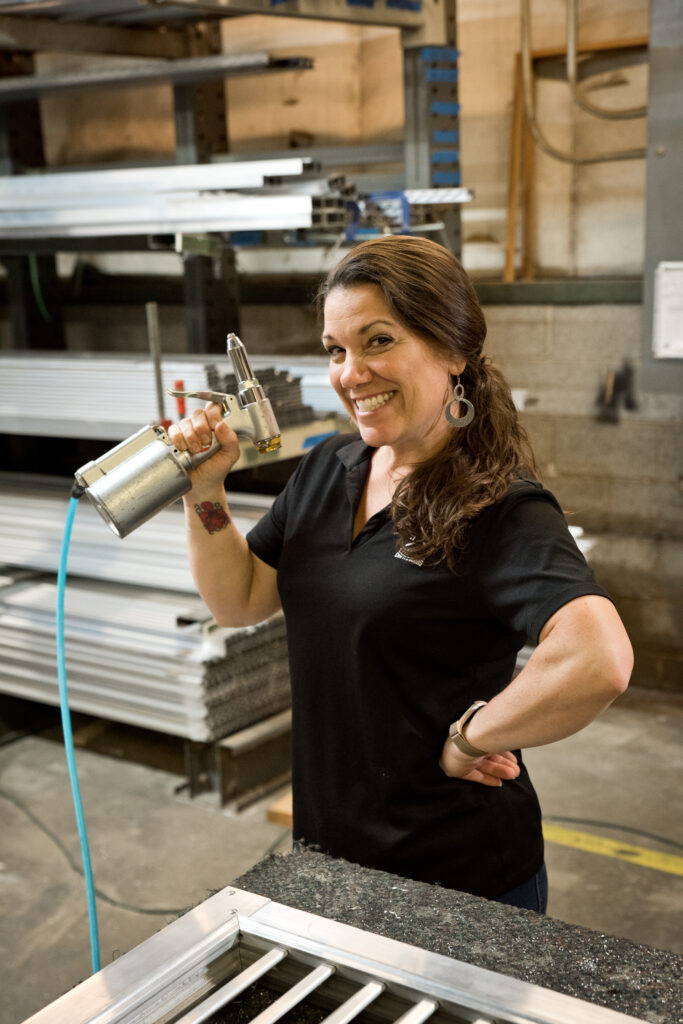 “I help  you love your curb appeal.”

If you want to get Kristin talking, ask her about one of her trips out of the country. She loves to travel and has been to Asia, Africa, Canada, Central & South America, Europe and to all but 4 states in the USA. Once upon a time she completed an Ironman triathlon and while she’s not trained for distance in quite some time, she still runs and rides on a semi-regular basis. Originally from Massachusetts, she has called South Carolina home for over 15 years. She credits her parents for giving her a strong work ethic and belief in her dreams. Growing up, she was encouraged to work for what she wanted – whether it was shoveling stalls in exchange for riding lessons at a local horse farm or waiting tables to save up for a cruise with friends or babysitting every weekend in order to buy a used car, she learned from an early age that if she wanted something bad enough, she’d have to work her tail off to get it. She hopes to inspire her team to pursue their dreams and looks forward to growing SCS in such a way that she is able to give back to the community around her. 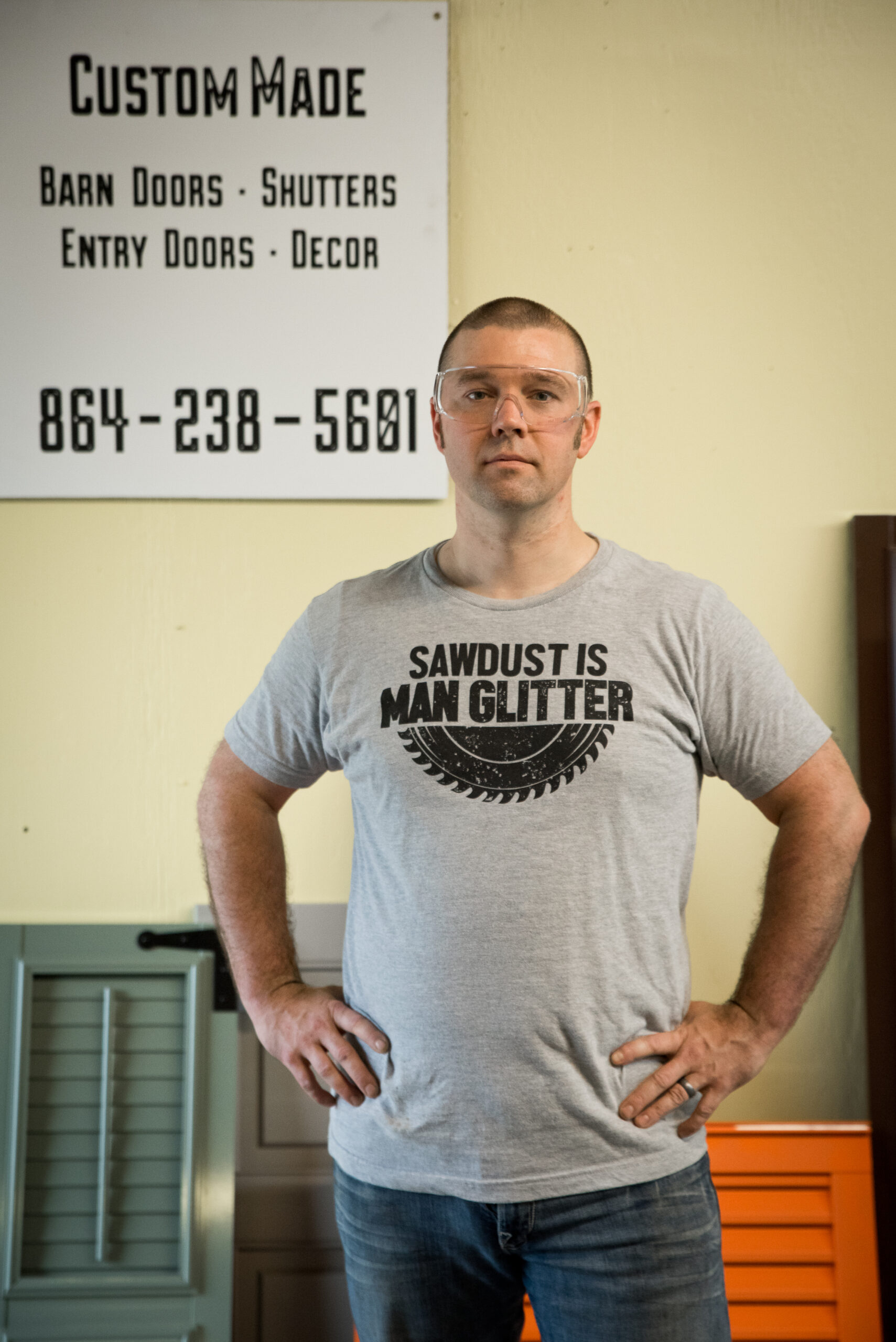 “I bring your design to life.”

Some people say Adam is the inspiration behind McGyver because he’s so good at figuring out how to make something work. He’s been tinkering and causing mayhem since he was young when he took apart his mother’s sewing machine, just to see how it worked, and when he created a “scuba tank” from materials around the house and put it to the test in the creek behind his house. Today, when he has some free time, he likes to refurbish batteries, tinker on his car, truck or tractor, and is forever trying to figure out the secret to the perfect lawn. Someday in the future, he’d like to get an RV and travel across the country. For now, he enjoys exploring new roads on his road bike to find potential bike routes that have pretty scenery and are tame enough that Kristin won’t be afraid to join in the fun. 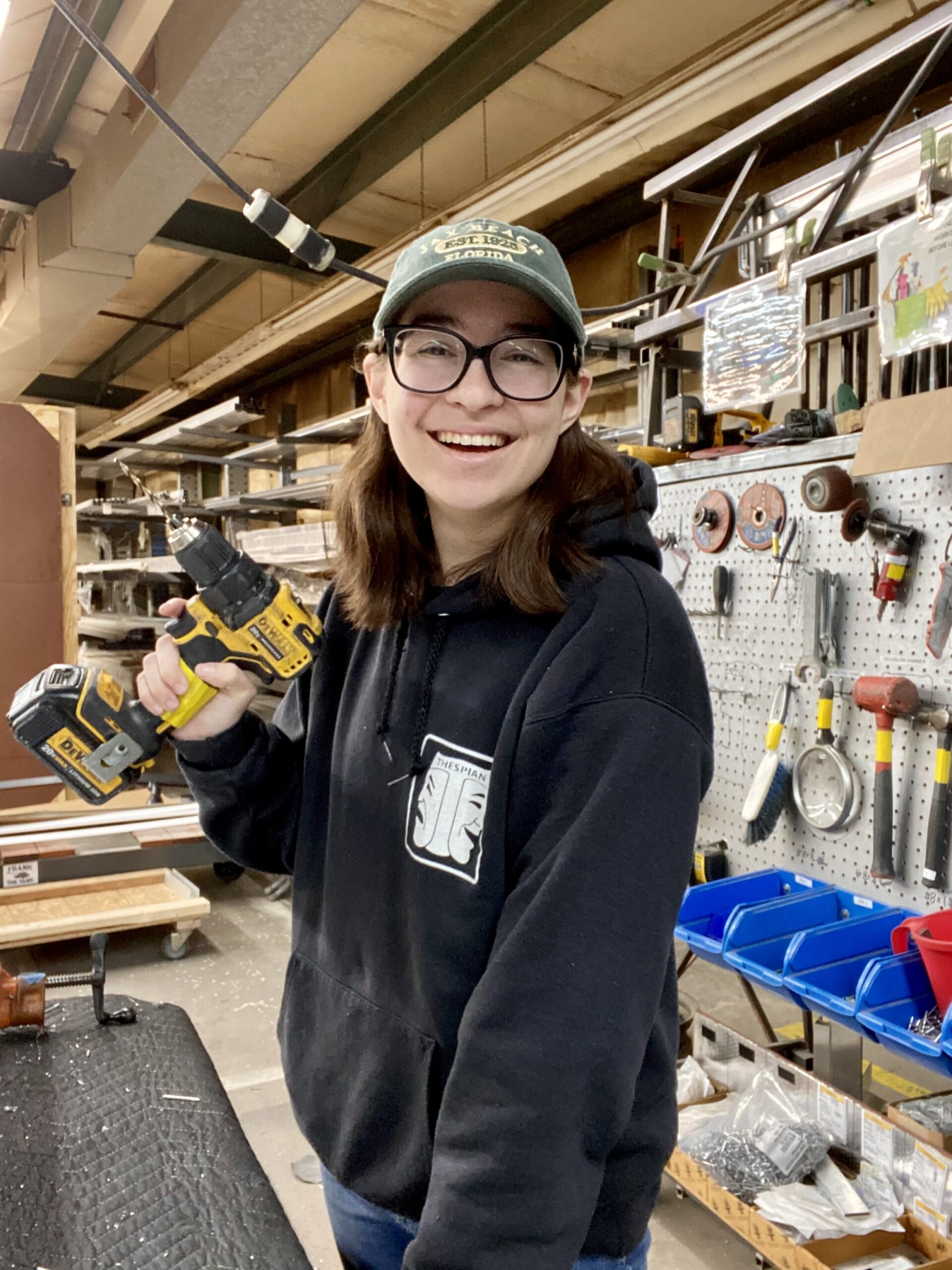 “I assemble your shutters to get them to you promptly.“

Sumer is the newest member of the Southern Crafted team. After growing up in Florida and graduating from high school, she has lived in 3 different counties outside of the US serving people in many capacities. She settled here in Greenville just a little over a year ago. As someone who loves working with her hands, she joined us to help assemble shutters, but she also loves graphic design which has lead to her helping in the office with our design needs.
When Sumer is out of the shop you can find her planning her next trip, working at her church as a leader for high school students, or exploring new areas with her film camera in hand. She has a heart for people and is excited to get your shutters to you. 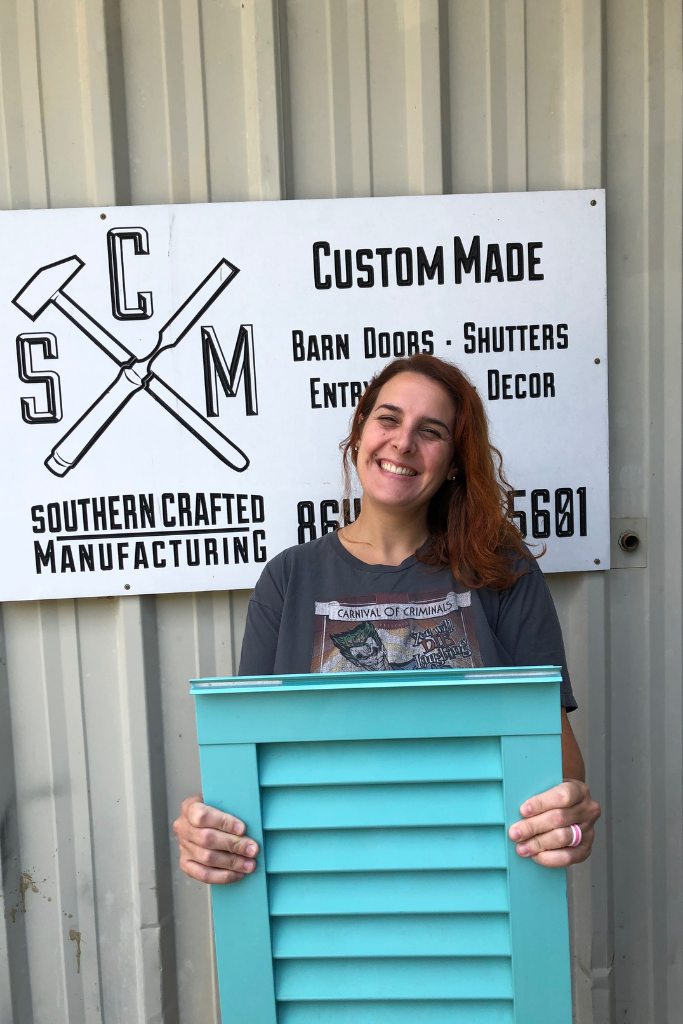 “I keep you updated on our latest projects.”

Mary enjoys helping in all areas around the shop, whether it be on the manufacturing floor or in the back office. She is always eager to learn new things, and quick to ask questions … like a lot of questions.  She is looking forward to being trained in all areas of the shop! When she is not at work, she is taking care of her family, mostly trying to keep up with her two young boys! In her spare time, she enjoys crafting, jogging, and binge watching her favorite shows. 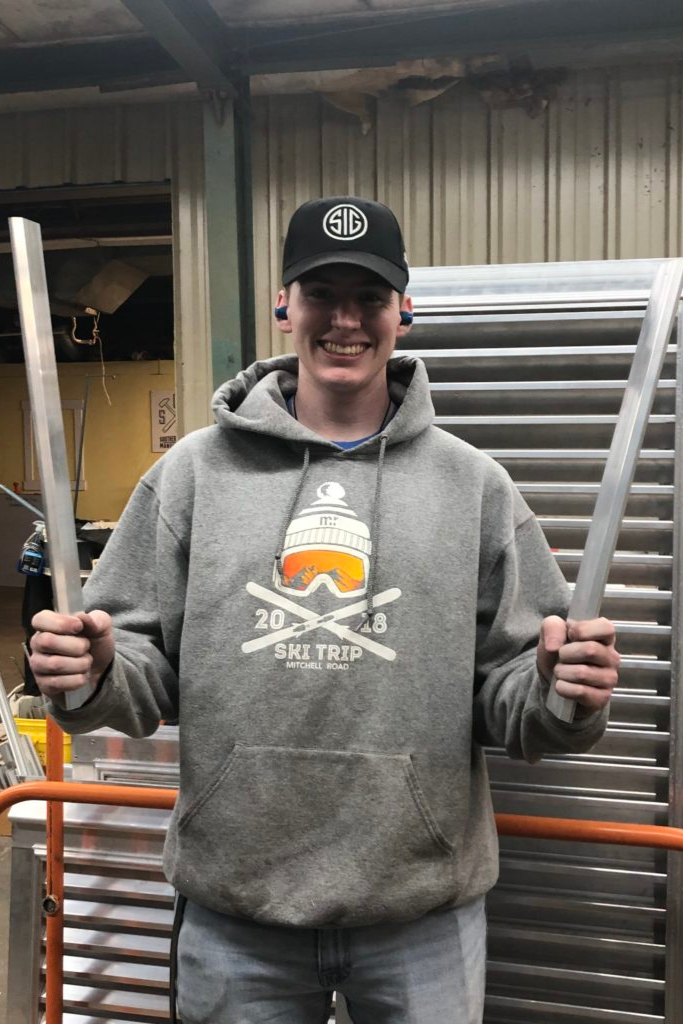 “I check your shutters for top quality.”

John is heads and shoulders above the rest…. literally, here at the shop. Not only is he tall enough to reach a lot of things, he’s also strong enough to carry stuff, too. He’s currently studying mechatronics and can’t wait until the day he can sit back in the corner office eating bon bons and waiting for people to come to him with their challenges. Don’t tell him that day is NOT anytime soon, because he’s living the dream right now! 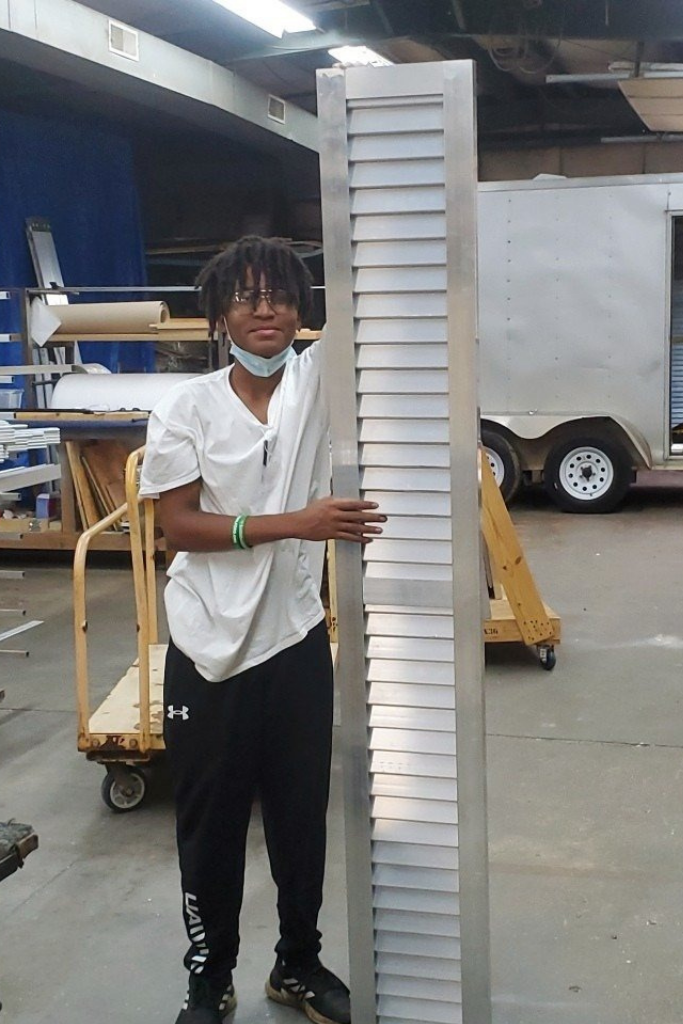 “I build your shutters with pride.”

Zionn is our amazing apprentice. The skills he has learned from his building and construction course at Golden Strip Career Center have prepared him for a successful transition into the workplace, and we love being his first job experience! When he’s not at work or school, he’s working on his driving skills so he can get enough hours in to qualify for his driver’s license test and drive his twin sister around town. 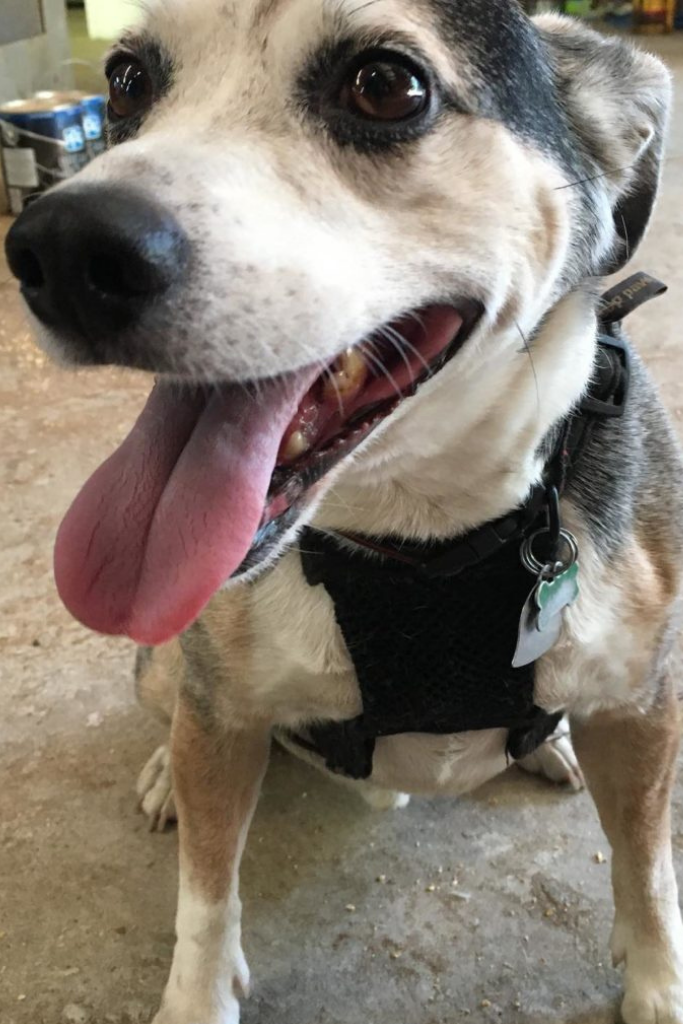 Bootz gets all the attention around the shop – and he kind of likes it that way. He makes sure the shop and surrounding area are clear of lizards, mice, chipmunks and just about anything else that tries to run around and make our shop its home. He was used to always being the employee of the month, and got a little jealous when the team started to grow. Now he’s thrilled to have more people love on him daily! 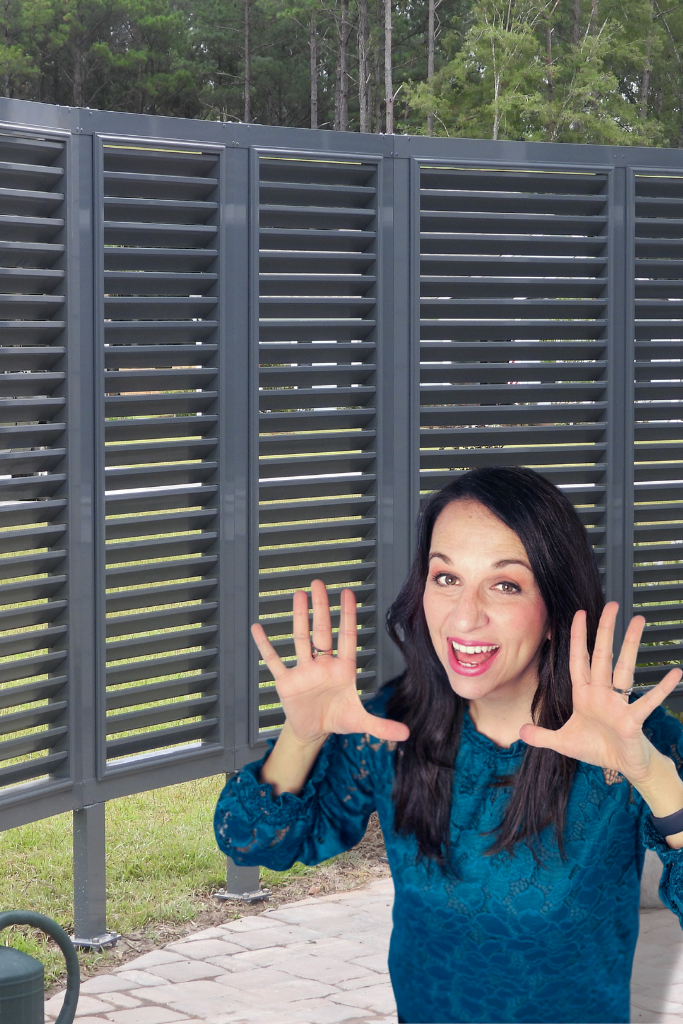 “I help you find what you need.”

Nicole and Kristin met during a workshop based on the book Get Different.  Nicole was looking for ways to add value to her clients and Kristin was looking for creative ways to reach clients.  Since then, Nicole has been the secret sauce behind Southern Crafted Shutters’ marketing.  In addition to being a marketing genius, she’s the mom of 2 little boys who keep her on her toes and the producer of The Serial Entrepreneur Podcast where she shares tips and stories from her own experience and interviews a wide variety of entreprenuers about their journeys.

Hand Crafted Shutters:
Made to Order.
Made to Last.